Nissan Vernon car dealership was nice enough to sponsor a vehicle and driver for me to participate in the IPE (Interior Provincial Exhibition) parade, my FIRST parade as Miss International Volunteer 2019! It was such an honor to have my first parade e a local one!

Thank you Taylor for driving me ❤ 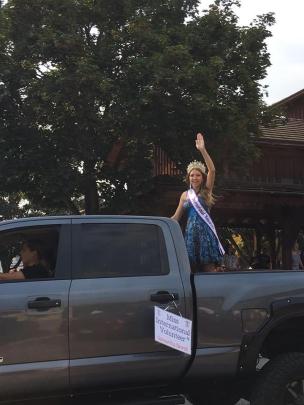 Then after the Parade, Mom and I went to the Fair! Which as usual was amazing, thought the Faris wheel is nowhere comparable to the one we rode in Seattle in July!

And I tried the infamous horse blankets, for the first time haha!

Castanet featured me in a back to school feature about the anxiety and fear I faced back when I was a High School Student. Read the story by clicking here.

An event I try to do annually is the Salmon Arm Fair Parade, I lived in Salmon Arm for a year and went to the fair for most of my childhood.

I arrived thinking I was going to be with the fireman, but instead, I was put on a beautiful car by which is a part of the Vintage Car Club of Canada, and his owner Duff was more than happy to have me on board!!

My outfit matched the car even though I had no idea. Before the parade, I had my photo taken with some medal winners from the Special Olympics. 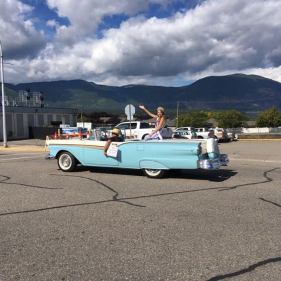 I was invited by the Vernon Suicide Auxiliary council to come to be a featured survivor for world suicide day. I spoke about my story and how I recovered, with a chocolate bar with the kids help phone number on it and a single teacher. I also made a “survivor lantern” for my self.

I volunteered at the local Terry Fox run. I cheered on the runners, who some of which finished running 10Km in just over 30 mins, which is insanely fast!!

This was this years only kidney walk in the north Okanagan, raising money for the BC and Yukon Kidney Foundation! Despite the weather getting cold and it raining all day I was thrilled to see a very good turn out!