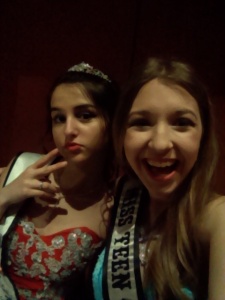 On February 4th I was visiting royalty at the 56th queen and princess Silver Star coronation. This event was the beginning of a very busy week for me, it was the first event of the Vernon Winter Carnival, which is an annual event in Vernon that attracts people form across Canada to come and enjoy our little town. The queen and princess Silver Star are my town’s local ambassadors and represent Vernon across BC for the next year. At the show there was over 20 royalties who came from all across BC. This included the May Day Royalty that I watched get crowned last year it was great to see them again. The show begins with speeches from the mayor and the BC MP.
Then there was a beautiful opening number and the presentation of the top in 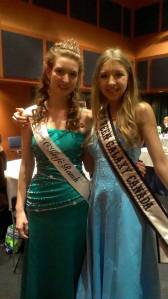 talents, the candidates were very impressive. Then the Fathers and Brothers of the candidates presented them to the crowd. This was followed by the question and answer round, and all of the candidates presented themselves very well. There was an intermission, during which the visiting royalty went back stage and had fun talking and taking photos. We presented ourselves to the crowd and announced who we were and which city or country we were representing. After all of that, the retiring Queen Silver Star gave her farewell speech about her year and the events she had attended. It was a great night to kick off Vernon’s Winter Carnival. Congratulations to the new Silver Star Royalty and to all the beautiful candidates, you are all great representatives of your local area and of BC. More Pictures located here.